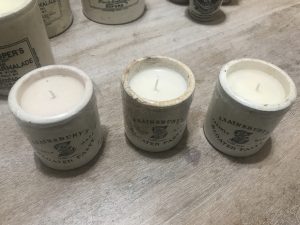 You will receive one (1) of these charming pots from my current inventory filled with a lovely Soy candle with the Parsons Green scent.  Great for gift giving!

The Parsons Green scent is an uplifting blend of fresh cut evergreen, hints of eucalyptus and cranberries.  A customer favorite with a lovely year round scent.